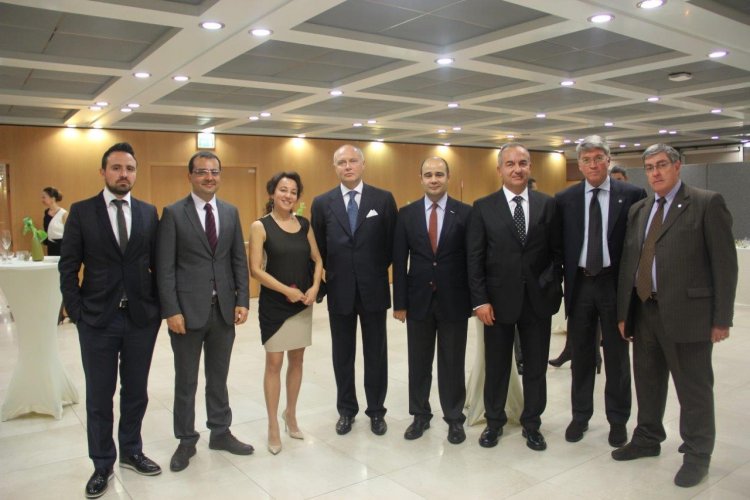 TURKEY’S MOST SUCCESSFUL AGRICULTURAL MACHINERY PRODUCERS MAKE CONTACTS STRENGTHENING TURKISH - ITALIAN RELATIONS DURING 5-DAY EXHIBITION HELD IN ITALIA
TURKEY’S MOST SUCCESSFUL AGRICULTURAL MACHINERY PRODUCERS MAKE CONTACTS STRENTurkish Machinery, TARMAKBİR (Turkish Association of Agricultural Machinery and Equipment Manufacturers), one of the broadest-based associations of Turkey, and POMSAD (Turkish Pump and Valve Manufacturers’ Association) participated in EIMA (International Agricultural Machinery Exhibition) held between 12-16 November 2014 in Bologna.
At this major platform bringing together the professionals, information about Turkish producers’ successful works and rapid rise of the Turkish machinery sector was shared with the visitors. Italy occupies top position with her 13% share in Turkish agricultural machinery exports, which is the result of the relations between the two countries being established on right and sound foundations.Matters concerning the activities that will enhance the cooperation between the agricultural machinery sectors of Turkey and Italy, and organization of EIMA’s Turkish leg were discussed at the cocktail attended by Mr. Massimo Goldoni, Chairman of Italian Agricultural Machinery Federation (FEDER UNACOMA), as well.GTHENING TURKISH - ITALIAN RELATIONS DURING 5-DAY EXHIBITION HELD IN ITALIA
All participants and guests came across advertisements featuring “Turkish Machinery Sector” on their way from Bologna Airport to Piazza Maggiore at the city center, as well as in sectoral magazines related with agriculture, on buses and at various zones of the exhibition area. The advertisements drew attention to the current level reached by the Turkish agricultural and machinery sector since the very beginning of agriculture in history, arousing interest of the inhabitants of the city in Turkish agriculture. Turkish machinery producers said they were proud of the interest attracted and of the activities carried out by Turkish Machinery.
With 96 manufacturers, Turkey was one of the countries with the strongest participation in EIMA. Voicing Turkish Machinery’s views, Vice Chairman Mr. Kutlu KARAVELİOĞLU said: “In our country having an agricultural economy ranking 1st in Europe, 7th in the world, the agricultural machinery sector was bound to grow, develop and go from strength to strength to meet the requirements of our own farmers in the first place, crossing borders and making Turkey one of the major countries capable of offering almost all agricultural machinery including tractors at the European quality standards, to the Europe, which is our main market, and to the world farmers. Organization and solidarity of its members has made it possible for the production to become well-established at the right level from quality-price standpoint, enabling the sector to take giant steps forward in the last decade. After Agritechnica-Hannover Fair, EIMA-Bologna Fair has also been very efficient and successful for Turkish firms, with many participants firms having the opportunity to follow closely the sectoral developments and returning from the exhibition with new business deals, orders and partnership proposals. Such collaborative ventures are the pride of the Turkish machinery sector, as well as of the Turkish machinery producers.”
Following this successful fair that ended on 16th November, Turkish Machinery Group is preparing to participate in SIMA Fair to be organized between 22-26 February 2016 in Paris.
About Turkish Machinery
Turkish Machinery was established in 2007 by the Machinery and Accessories Exporter’s Union with a view to realizing activities for promoting the machinery sector more effectively and developing its image at home and abroad, increasing the exports of the machinery and components thereof sector, and organizing brand-building, R & D and joint promotional activities.
The Machinery and Accessories Exporter’s Union, on the other hand, became operational in the year 2002, and is Turkey’s sole exporters union representing the machinery exporters. It has some 8,000 members consisting of machinery exporters. (www.turkishmachinery.org)
About TARMAKBİR
Established in 1978, TARMAKBİR (Turkish Association of Agricultural Machinery and Equipment Manufacturers) is an association of manufacturers, exporters and importers operating mainly in the field of agricultural tractors and other agricultural machinery in our country. Being a private sector initiative, TARMAKBİR has members ranging from SMEs to the leading sectoral firms and multinational companies operating in Turkey. The aim of TARMAKBİR is to support its members in legislative, technical, scientific, commercial, environmental, statistical, information- and communication-related matters by creating an active platform at home a and abroad. In the direction of this goal, TARMAKBİR is in continuous communication and cooperation with public entities and various organizations at home and abroad. TARMAKBİR has 243 members. (www.tarmakbir.org)
About POMSAD
POMSAD (Turkish Pump and Valve Manufacturers’ Association) operates in order to bring together the organizations and persons that serve Turkish pump and valve industry, that are engaged in the design or manufacturing of pumps and valves, to look for common solutions for the problems in every area of the sector, to ensure solidarity to this end, to enter into joint ventures for developing the sector, to improve quality and productivity, to render competitiveness institutional and permanent, to contribute towards development of Turkish Pump and Valve Industry by encouraging research and development, to voice the potentials and problems of the sector before national and international authorities, to take part in umbrella organizations geared towards activities paralleling its goal, to make a contribution towards advancement of Turkish Industry in solidarity with associations and similar organizations representing other sectors. Established in 1996 and having 44 member-firms, POMSAD is the 6th biggest association in the EU, and currently holds the position of the Vice President of EUROPUMP (The European Association of Pump Manufacturers) and the Former President of CEIR (The European Association of the Taps and Valves Industry). (www.pomsad.org.tr)
Next All