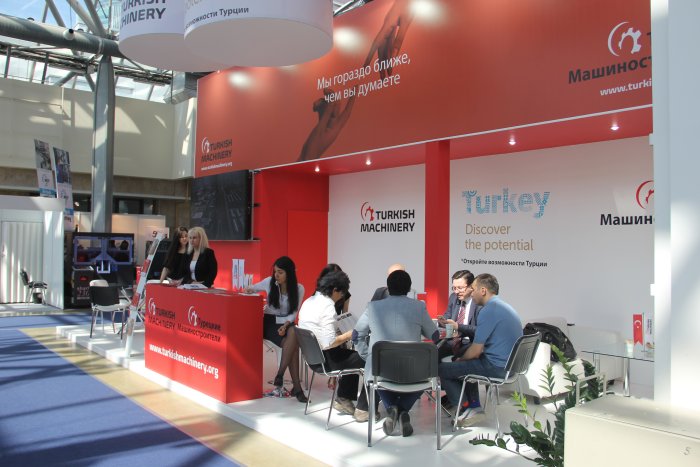 Russia is a new target market for Turkish Machinery due to its huge potential and strategical location. For this framework, Turkish Machinery prepared an appendix about “Turkish Machinery Sector” and distributed with Russian Komsomolskaya Pravda and Kommersant Newspapers. Moreover a press conference was hold in Moscow Pravda Center to announce Turkish Machinery movement. Metalloobrabotka Fair is the first fair in which Turkish Machinery attended to increase promotional activities in target market Russia. Turkish Machinery made a quick start by attending Metallobrabotka Fair which held in 25-29 May, 2015 with a 40 m2 info stand in Moscow. 11 Turkish companies exhibited their products in the fair and some of them accompanied with their agencies.
Board Members Sevda Kayhan YILMAZ, Ferdi Murat GÜL, Mehmet AĞRİKLİ and Hüseyin DURMAZ made meetings with Russian Engineering Union, Russian Machine Tool Association and editors of different sectoral magazines. Besides, in order to evaluate investment opportunites in Russia a meeting was held with the managers of Tatarstan Çelny Industrial Park. For the same purpose Board Members visited “Technopolis” which is one of the leading R&D centers in Moscow.
Advertisements about Turkish Machinery was taken placed in the entrance of Forum Pavillion in which Turkish Machinery booth is located, posters in the building where subway entrance of the exhibition centers and some other posters.
Next All