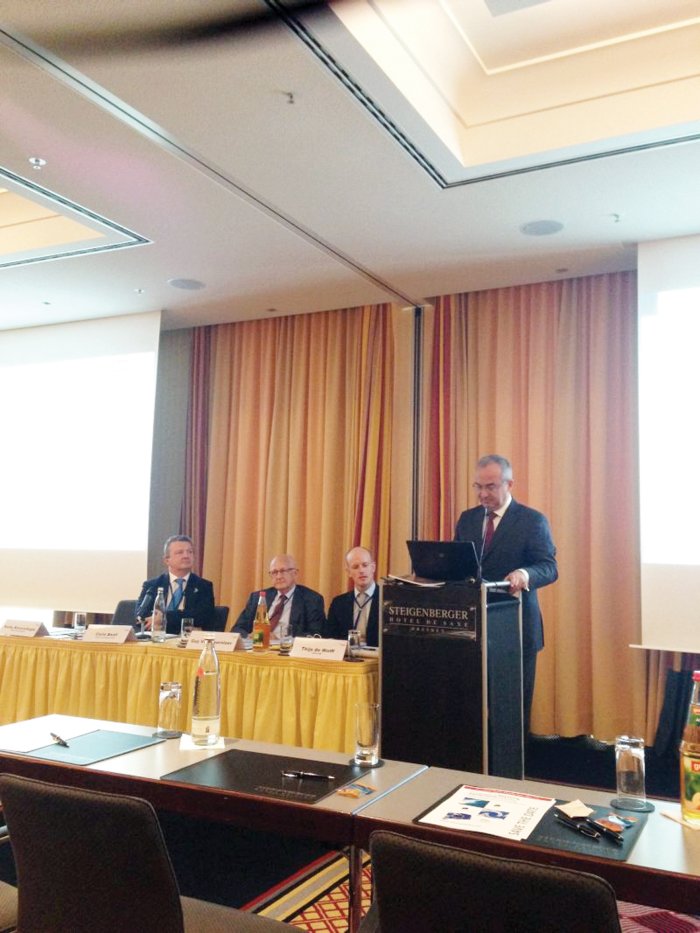 At the 55th General Assembly of EUROPUMP hosted by VDMA in Dresden, Kutlu Karavelioğlu was elected president. Karavelioğlu, who has been a member of the executive council since 2001 and vice president since 2013, will serve as the past president for 2 more years, after completing his presidency term.
The level our machinery manufacturers have reached, helps the presidents of the associations of our subsectors, which stand out with their production potential, competitiveness, quality and skills in developing technology, assume major duties in international top organizations. Kutlu Karavelioğlu, vice president of our MAİB and MTG, in his capacity as the president of the Turkish Pump and Valve Manufacturers Association (POMSAD), was elected president of the European Pump Manufacturers Association (EUROPUMP) at the beginning of May.
Annual meetings and the general assembly of Europump, traditionally being organized by a different member country each year, was in Dresden in 2015. In the agenda of the general assembly, held on the last day of the meetings organized by the German member VDMA, was the nomination of the new council members and the elections for the president and vice presidents who will serve for a term of two years. Kutlu Karavelioğlu was elected president to replace Carlo Banfi, president of the Italian Pump Manufacturers Association (ASSOPOMPE), who completed his term and started serving as the past president.
Ken Hall, the representative of the British Pump Manufacturers Association (BPMA), and Martijn van den Born, the representative of the Holland Pump Group, were elected vice president. The executive council of the association, of which POMSAD became a member in 2001, consists of one representative from each member country.
Established in 1960, EUROPUMP brings together the associations of 17 countries, 14 of which are EU members. Through its member associations, EUROPUMP represents more than 450 pump manufacturers, a production volume over 10 billion euros and a sector that employs around 100,000 people.
Like in many EU top organizations, within the annual meetings, commission meetings are organized prior to general assembly session, in fields of technical, standards, marketing and small enterprises and meetings of working groups such as eco design, energy efficiency, carbon footprint and simultaneous social events for the partners. At the same time, sessions are organized with the managers and members of the American Hydraulic Institute (HI), with which the association has been in close cooperation for over 25 years, and efforts are made for the harmonization of technical issues and standards in both continents and joint projects are reviewed.
At the General Assembly that convened on 9 May, the past president Carlo Banfi gave a vote of thanks in which he talked about the efforts made during his term and the results obtained, and left the duty stating his wishes of success. Kutlu Karavelioğlu shared his feelings and stated that the election of a Turkish president was a significant indicator of the European high culture and democracy, and he was proud to see that the respect and trust in Turkish manufacturers, who he is honored to represent, was revealed with his election for presidency.
The next annual meeting of EUROPUMP will be organized in Gent, Belgium between 26 and 28 May 2016, and the details will be available on the website www.europump2016.com which will be active in September. The 2017 meetings are planned to be held in Bodrum and hosted by POMSAD.
Next All