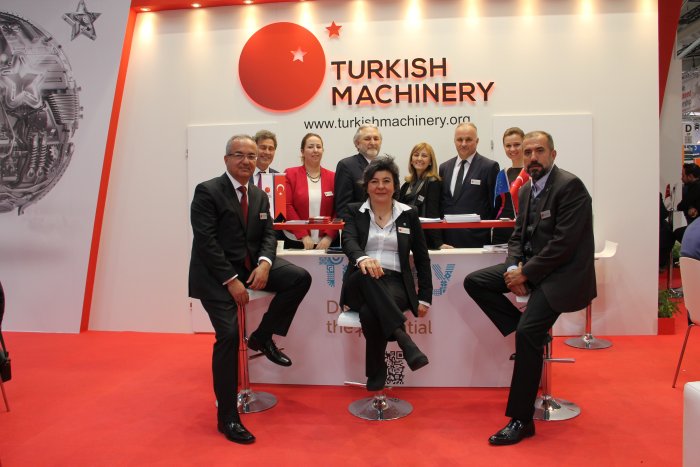 Turkish Machinery Group (TMG) attended Hannover Fair with a stand in Hannover/Germany between April 25-29, 2016. 135 Turkish companies participated to Hannover Messe which has always been the most important trade show of the year for TMG, especially as it attracts so many visitors from all over the world.
Within the context of the fair, Turkish Machinery conducted a big media campaign. Turkish Machinery advertisements took place at baggage cubes in Hannover airport, towers, taxi stands, billboards at the fair ground, fair catalogue, fair newspaper “Messe Daily” and advertisements at shuttles and enterance of metro station. Flyers, which indicate locations and productions of Turkish Machinery companies at the fair, were distributed at TMG booth.
TMG was also the sponsor of the Opening Ceremony attended by Angela Merkel, The Prime Minister of Germany and Barack Obama, President of the USA.
A visit for Turkish press group was also organized by TMG between April 25-26, 2016. Vice President and Board Members of Turkish Machinery hosted the press to share economic results of 2015, to present international cooperations between Turkey and Germany and to talk about sectoral problems. 11 journalists participated to the fair whom are working as Economi Editor/Economy Manager in national media publishers.
Approximately 400 Turkish and foreign visitors attended the cocktail organized by TMG on April 25, 2016.
A cooperation agreement signed between BME (The Association Supply Chain Management, Purchasing and Logistics) and Turkish Machinery. Also a meeting was held with President and General Managers of VDMA (German Engineering Federation) to talk about common projects.