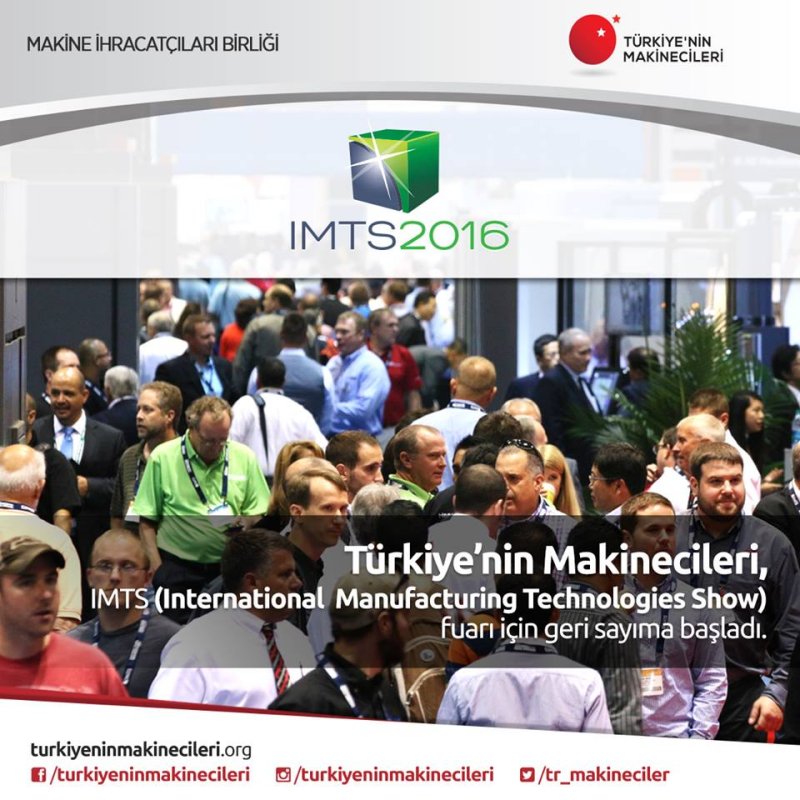 Turkish Machinery Group announces that they will participate in IMTS fair between 12-17 September 2016 in Chicago. This will be the first time Turkish Machinery Group attends the IMTS Exhibition organized for the 31st time in the fields of metal forming, fabricating, welding and finishing technics. After having participated in the exhibition of MDA in 2014, Turkish Machinery displayed its strength in Fabtech Chicago, NPE Fair, Commodity Classics in US market.
IMTS Fair will gather around 2.000 exhibitor and hundred of thousand visitors all around world. 16 Turkish companies will exhibit their products in this leading show. Turkish Machinery will strengthen its position by platinum sponsorship and advertisement on the North Hall map.
Stating that the machinery sector has a wide product range, Adnan Dalgakiran, Board Member of Turkish Machinery Group also noted that as the US is a huge market, the Group attach great importance to the determination of and concentration on potential sub-sectors and states.
Export to the US increased 18% in 2015
Dalgakiran, indicating that the US comes second after Germany which has the highest share of Turkish machinery export, said "Turkey’s machinery export to the US which amounted to nearly 1 billion dollars, increased 18% and the US share of total Turkey’s machinery export reached 6.5% as compared to the previous year." Emphasizing that enhancing business relations between Turkey and the US, which is the world’s biggest machinery importer, harbors great economic opportunities for both countries, Dalgakiran also added that "Our priority is to strengthen the sub-sectors beginning to make their presence felt in the US market which comes second after Germany and promote other sub-sectors of machinery which have not yet been introduced in the US."
The most preferred Turkish machinery in the US market
Turbines and turbojets, hydraulic cylinders, agricultural machinery, arms and munitions, air conditioners and cooling machines, motors and components, pumps and compressors, construction machinery and machine tools have the largest share of the machinery export to the US which is the strategic market for the Turkish Machinery Sector.
Turkish Machinery Sector has a 10% share of the total Turkey’s export volume
With a 10% share of the total Turkey export volume, the Machinery Sector is one of the fastest growing sectors within the Turkish economy. Being the 6th largest machinery manufacturer in Europe, Turkey exported nearly 14 billion dollars in 2015. EU countries and the US are the leading export markets for the Turkish Machinery Sector exporting to approximately 200 countries around the globe.
Turkish Machinery Group
Turkish Machinery Group was established by Machinery Exporter’s Association (MAIB) in 2007. MAIB is the only Association in Turkey in which machinery exporters are represented. MAIB originated in 2002 to coordinate all activities to ensure export growth in the sector. The Association currently has 8,000 Turkish machinery members. Turkish machinery members follow the European Union and international standards and norms, and the majority of them have the “CE” mark on their products.
Next All