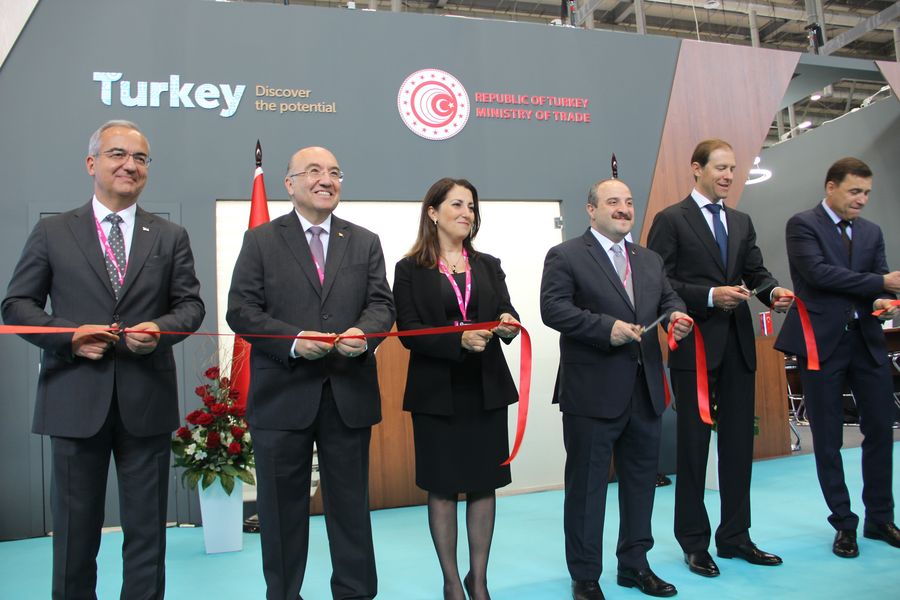 Turkey, this year’s partner country of INNOPROM, one of the greatest industrial fairs of the Russian Federation, has engaged in promotional efforts at Yekaterinburg with the support of Ministry of Industry and Technology, Ministry of Trade and Turkish Promotion Group. Pointing out that they engaged in promotional efforts under the trademark Turkish Machinery at the fair, which was also attended by the Ministry of Industry and Technology, Mustafa Varank, and Deputy Minister of Trade, Gonca Yılmaz Batur, Chairman of the Turkish Machinery Exporters’ Association, Kutlu Karavelioğlu said, “Our total machinery export to Russia amounted to USD 224 million during the first 6 months of the year. Despite the 12% increase as compared to the same period of the last year, we see that we still have not attained the level that we desire in machinery trade with Russia, given the machinery export figure of USD 769 million attained in year 2013. It is our desire to be more than a reliable neighbor for Russia and to become a strategic solution partner of the Russian industry for technology.”
Minister of Industry and Technology, Mustafa Varank, and Minister of Industry and Trade of the Russian Federation, Denis Manturov, delivered speeches during the opening of INNOPROM International Industrial Fair. After contacting the President of the Republic of Tatarstan, Rustam Minnikhanov, Chairman of the Turkish Machinery Exporters’ Association, Kutlu Karavelioğlu, signed a protocol on cooperation with Ural Chamber of Commerce and Industry on the first day of the fair.
The musical performance and the digital show that took place at the opening of the fair as well as the area for food tasting that was available at the Turkey booth and the cultural events organized throughout the fair were received with great admiration by the visitors. Many interviews were given to the Russian press during the fair.

Answering the questions from the Russian journalists jointly with Deputy Minister of Trade, Gonca Yılmaz Batur, during a press meeting held in Russia before the fair, Karavelioğlu stated that they believed the private enterprise in Russia would be further uplifted with industrial investments, and said:
“Capital will be created and capital ownership will spread in Russia through investments in manufacture. Many small to medium scale enterprises will be established in order to meet the needs of the country for consumption and comfort on a national level; and the need of these enterprises for machinery and equipment will require more imports. We believe that Russia needs to develop strategic business partnerships with Turkey in order to fix the foreign trade deficit of USD 30 billion attributable to machinery. We would like to be a strong part of the industrial transformation that has already started in Russia.”
Making a presentation to the Turkish and Russian businessmen during DEİK Turkey-Russia Business Council on the first day of the fair, Karavelioğlu stated that Turkish machinery sector, the sixth largest manufacturer in Europe, is ready to share their knowledge and experience in this field with the Russian firms, and said:
“With our investments in R&D and innovation, we sell 60% of our exported machinery to EU countries and USA. We see the recent re-increase in the pace of the business relationships between Turkey and Russia and the growing dialogue between the firms as a very important opportunity for this purpose. The partnerships, through which we can join our engineering and free enterprise skills, will contribute great strength to both countries in the field of state-of-the-art technology. It would be a prospective strategic move to create the investment infrastructure that will unite the new engineers, who have their designs, and the entrepreneurs, who have their ideas; and especially to create joint projects at the levelof universities.”