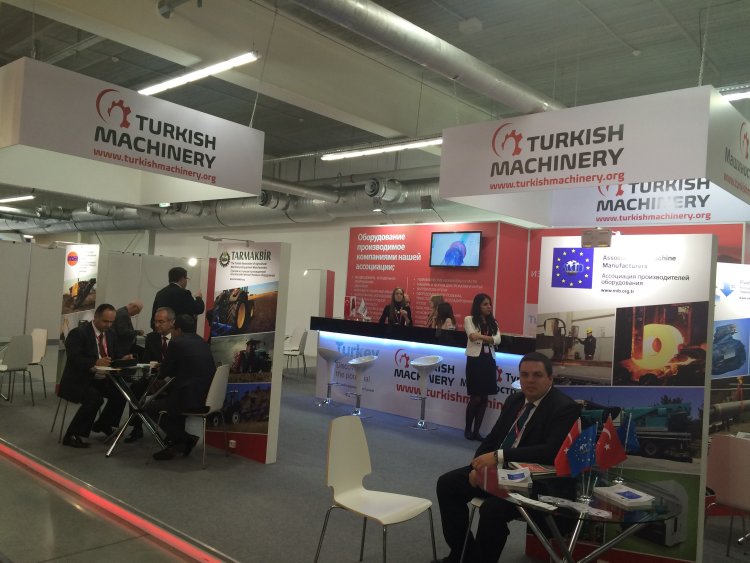 Turkish Machinery Group (TMG) is going on its activities in Russia

Turkish Machinery Group participated in Innoprom Fair with 90 m2 booth between 8-11 July 2015 in Ekaterinburg/Russia. During Innoprom, which is the second fair TMG participated in its target market Russia, represantatives of 7 subsectoral associations (AKDER, ARUSDER, ENOSAD, İMDER, MİB, KBSB, TARMAKBİR) provide informations to visitors about their subsectors.
Vice Chairman Kutlu KARAVELİOĞLU and Board Member Ferdi Murat GÜL participated in the fair on the behalf of TMG. To promote Turkish Machinery sector and enhance bilateral relations, Commercial Counsellor of Moscow Sinan ÇETİN, Head of Research and Development in Ministry of Economy of Turkey Üstün ALAN and delegation of TMG met with related foundations.
In this context, meetings with Minister of Industry and Trade of Russian Federation, Minister of Industry and Trade of Tataristan, Deputy Foreign Minister and Foreign Relations of Sverdlovsk Region, Deputy Minister of Industry and Trade of Sverdlovsk Region and Vice President of Ural Chamber of Industry and Trade were hold. During these meetings, informations about Turkish Machinery sector, activities and targets of TMG in Russia was given, additionally, collaboration opportunities were discussed to enhance trade relations between two countries. On the other hand, Board Member of TMG Ferdi Murat Gül, participated in panel “International Experience of Import Substitution in Industry” as a speaker and gave an interview to Russian channel, Ermak TV.
Advertisements of Turkish Machinery Sector which were designed in Russian, took place at the fair ground and fair catalogue. Besides, an appendix about “Turkish Machinery Sector” published in Russian Komsomolskaya Pravda and Kommersant Newspapers on July 1st was distributed to the booths in the fair area.